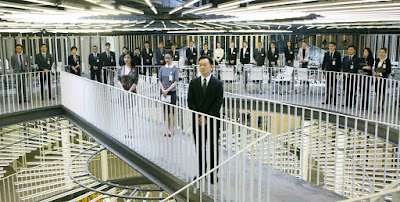 In what is quickly becoming an annual tradition, Mike and Sean ventured out their local AMC theatre to record an episode on-location at the Seattle premiere of the new Johnnie To film. This year it's Office, a musical drama set in a financial firm in the midst of the 2008 collapse starring Chow Yun-fat, Tang Wei, Eason Chan and Sylvia Chang (who also adapted the screenplay from her own play, Design for Living). Chang as well has a film she's directed playing at this year's Vancouver International Film Festival, as does Romanian director Corneliu Porumboiu, whose 2009 film Police, Adjective they also discuss this week. In addition they talk about the work of Johnnie To in general and pick some under-the-radar films they're looking forward to seeing during at next week's trip to VIFF.