Episode Twenty-One: Monsieur Verdoux and Bonfire of the Vanities 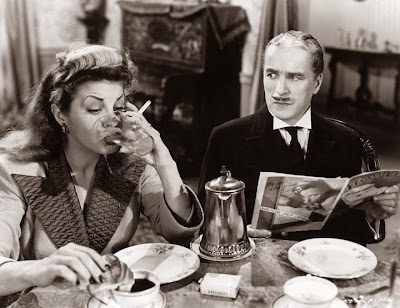 Celebrating Thanksgiving with a couple of Turkeys this week, Mike and Sean take a look at two films that flopped on their initial release: Charlie Chaplin's 1947 Monsieur Verdoux and Brian DePalma's Bonfire of the Vanities, from 1990. They also discuss the career of Charlie Chaplin, get the inevitable onslaught of award-talk rolling and make their picks for Essential Cinema Feast.

Correction: Sean said that James Agee's articles about Monsieur Verdoux were in Time Magazine. Of course the were in The Nation.

This week, Mike and Sean celebrate the Doctor Who 50th anniversary with a look at a pair of timey-wimey movies, the late 80s classic Bill & Ted's Excellent Adventure and Buster Keaton's 1923 triptych Three Ages. They'll also discuss the best undistributed films of 2013, their essential Time Travel movies and and cover a small fraction of what Mike has to say about The Doctor.

25 Best Undistributed Films at Film.com
More about Scarecrow Video in the Seattle Times

Episode Nineteen: The Big Parade and The Red and the White

This week, we celebrate Armistice Day with a pair of World War I movies (more or less) with King Vidor's 1925 smash hit The Big Parade and Miklós Jancsó's The Red and The White, from 1967. We'll also make our picks for Essential WWI movies, discuss the great actress/inventor Hedy Lamarr, who would have turned 99 years old this week. Also: more on the state of video stores with news from Blockbuster and TCM, a look at some upcoming Yasujiro Ozu retrospectives and the European Film Award nominations featuring a few George Sanders favorites.